Last Thursday, we had the pleasure of reading at the Laramie County Public Library in Cheyenne. Lilly, Alec, Ammon, Liz, and Kat all read from their work. The LCPL is pretty swank and includes this weird device where you insert a coin and it spins round and round in a wide bowl. We also enjoyed some dope teppanyaki on the program’s dime at Wasabi. 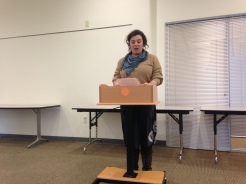 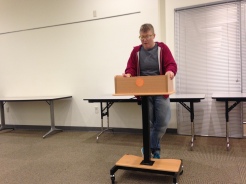 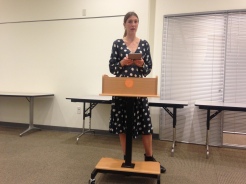 We’re super stoked to have fiction author and delightful dude Nam Le as our Eminent Writer in Residence this spring. We’re hosting a reading, reception, and book signing for Nam on February 12 and all are encouraged to attend. 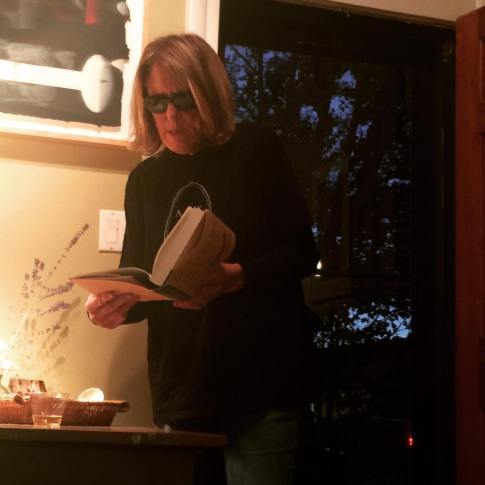 Last week, the wonderful Harvey Hix and Kate Northrop hosted a small gathering for those involved in the Creative Writing program. We all had the pleasure of hearing Joy Williams read a short story from her new collection, The Visiting Privilege. The story she read, “The Mother Cell,” witnesses the annual gathering of mothers whose sons grew up to be serial killers. Jason Burge, a fiction alum, introduced Joy as “the grand dame of American letters,” and the reading was a testament to how apt that introduction really is.

Bhanu Kapil, our Eminent Writer-in-Residence, will be reading at the UW Art Museum tomorrow (March 10th) at 5PM. She will be reading from her new book Ban en Banlieue which begins when a brown girl walks home from school when a riot starts in 1979 London. Through the main character’s narrative, the book explores both political and somatic themes. Below is an excerpt:

77.  We wanted to look for bottles, the tiny bottles we had heard were left in the roots of oak trees by elves. My dad said: “Be back by four.” And we leaped from the car into the rain. It was raining, but only lightly and we had anoraks on. I recalled the haystacks I’d once seen, at the very end of the park, where a gate was, and a white house with a thousand glittering windows. Once, in the private meadow edging the park, I saw riders in their scarlet coats. Their horses had coats. I’d shouted: “Oi!  Over here!  Yoo hoo!,” longing to touch the dark brown fur and feel the warm breath on my face. So I said to Thippy, come on. Thippy was a Sikh boy with hair down to his waist. Out of view of my father, he took off his pint-sized turban and let it fall. We said we’d say we were sisters, if someone asked, as we sometimes did at Balfours when we went to buy sherbet with ten pence stolen from the kitchen jar. It took two hours, that afternoon, to reach the haystacks and during our walk, we understood, in our hearts, that returning to the car would be just as bad as going back later. It was all the same. When we reached the gate, it was pouring and our hands were blue on the backs of them from the cold. A creamy mist had risen from the grass. From this mist appeared a horse, a completely white horse with mud-packed legs, and the rider tugged it so it came to where we screamed: “Horsey!  Over here, horsey!” And let us pet it, forever, chatting, a man. When we got back to the car, we were terribly wet. We got into the car, a blue Ford Cortina dented silver from my father’s many accidents. We got into the car and in slow motion my father twisted from the chest up, from the driver’s seat, to hit my face so hard the side of my head hit the window. At this moment, I became Ban. When Thippy grew up, and his own father dragged him home from the school disco at Villier’s High School, and beat him on his legs and back, he became a Sikh fundamentalist. He’d grown a beard by seventeen, and refused to meet my eyes on the rare occasions his parents forced him to come to our house for a Friday night dinner. He wore a black turban with a saffron headband and when he completely grew up he bought the house next to his parents and they built a corridor between the two. But what I’ve left out is his brother, a boy I knew in childhood who also made me Ban. Not because he accompanied me; on the contrary, because he, too, made me weep. He wasn’t a boy. When we were eight, he was eighteen. When we were ten, he was twenty.

Come join us tomorrow at 7PM in Night Heron Books for the second student reading of the semester! Carly Fraysier (non-fiction), Trey Williams (fiction), and Randall Tyrone (poetry) will be reading!