We’re all adults here (or very mature minors, I’m sure), so I’m going to explain my philosophy on writing with the help of non-hostile profanity.

What the fuck is fiction, and why should we care? Part of the answer lies in the second clause. I mean, I could say something really standard, like: when you strip away technique, plot, and language, you’ve got to have something real there. Whatever that means. I’m not sure that this is incredibly important to think about. I’d rather just fucking write something and figure out if it requires a category later.

No format is perfect for what I want to do. I can only get pieces to work, but not the whole thing. I don’t mind struggling a little bit, because I figure it’s worth my time, even if it turns out like cold shit-spaghetti on lightly buttered toast.

Okay, let’s talk about fucking success. Writers don’t like to talk about success for some reason, especially the kind of a commercial nature. If you like what you write, and you can make money, what’s the fucking problem? Also, it’s okay to write things you like. And fuck yeah, that’s selfish. But then again, pouring everything you’ve got into something without caring if it’s a total waste of time is pretty admirable in my opinion. You should be knighted for shit like that.

That reminds me — don’t be so fucking humble. Just be honest.

I think it’s good to have something at stake—something important, like food and shelter, or a story not turning out the way you thought because you took it in a different direction at the last second. It makes you learn to believe that things will work out, even if they don’t all the time.

I wasted a lot of time thinking serious stories could only be one way. Then I realized, my sweet bitches, that they don’t have to be.

Fucking have faith – in the important things. Like yourself, and humanity and shit. Don’t be such a little bitch. Jesus.

“I do think dog fucking is useful.”
-Tasha LeClair

“I know last story I called you a racist, and this story I’m calling you a sexist, but  I really don’t think you’re an asshole, I swear!”
-Estella Soto

our week-long residencies at the shortgrass steppe research and interpretation center (for second year, thesis writing mfa students) begin this week.  as if wyoming wasn’t isolated enough, we get put up in a big house on the plains in a room of one’s own.  and we write.  without the distractions of: teaching, grading, coursework, sex.  how will we fill the hours? with prose and poetry, of course.

sample to do list for the week at shortgrass:

the future looks bright with unstructured time.   we will compose with great haste and creative urgency.  like ewan mcgregor in moulin rouge, tearing sheet upon sheet from the antique type-writer.

there were more people than seats at last night’s event.  thanks to everyone for coming out, the wyoming mfa loves you. to recap the evening:

the ladies in the crowd say ‘what’

emily trostel: getting real, reading nonfiction about her wine habit.

after an altercation with max over the inexorability of truth in creative rhetoric, katie schmid ended up in his clothes. then she read us some poetry about a pack of wild fathers.

then there was this two headed santa and we were like, “what’s up, santa?”

thanks to second story books for hosting the event. and thanks to irina zhorov for taking the good photos seen here.

being marooned in Wyoming, at times, isn’t easy.  to-do lists that get longer before they get shorter.  bouts of self-doubt staring at a blank word document too early in the morning, either because you’ve stayed up late to get writing done or gotten up early to get writing done and somehow you happen to be awake at an hour associated with responsible adults, but instead of reading the newspaper over eggs and toast you are pulling out your eyelashes. then, there’s the weather. a friend in California, inquiring about my mental state, said to me in an email the other afternoon:

… winter is about to start, and being in your house all by yourself will either a. inspire some amazing writing or b. end up in a Shining like situation where you are talking to a ghost bartender and driving axes through the walls.

California is another world, right now.  And I’m suddenly relating to The Shining in ways I’d never thought possible.  REDRUM.  REDRUUUUUM.   I tell the ghosts to quiet down and reach out to California over gchat.

me:  i have a reading tomorrow
and i have to make up a bio
for the dude to read when he introduces me.
but i used my stock bio at the last reading so i need something new.
this is what i have so far:

estella soto is a fiction writer from southern California. she lost her virginity at the age of 16 to a boy on the varsity football team. she writes about this experience in her novels, “the whole 69 yards,” “what we talk about when we talk about butt sex”, and “first down.”

anyway/ how are you?
Kevin: i am ok. really busy.
work + building the new cobrasnake website + novella + blog + lit mag + social things
me: it all sounds like good stuff
productive!
Kevin: yeah. hoping to have the novella done by the time i turn 26.
ive really taken a turn with the prose though
stylistically very much diff from how it was the last time we talked
really got into joan didion’s fiction.
(though i still h8 play it as it lays)
and i think i was really struggling with third person.
really recommend didion’s ‘a book of common prayer’.
anyway yeah. other than that, i declared myself asexual. no more sex for, kb.
people have expressed skepticism as to whether or not it’s the case of somebody who ‘wasn’t getting any to begin with’ subverting the ‘rhetoric’ to make things seem cooler.
i say, ‘splitting hairs’. etc.
also tao lin may be sleeping over tonight.
but maybe not
oh also emily is watching over kanye west and his crew
tomorrow and sunday
while they edit his new music video
also what are you working on right now?

Doing some work for the department, I was tasked with calling Colson Whitehead.  This was particularly challenging for me because he happens to be extremely attractive.  Or so I have inferred from his author photos followed by a thorough google image search.  I hate talking on the phone, and if I think the person on the other end of the line is in the least bit wonderful, I fall apart.  He’s also incredibly smart and talented.  But because I’m kind of shallow, I don’t know that those virtues intimidated me more than the google image search results.

me: colson whitehead didn’t respond to my email and i am supposed to call him
i don’t want to do this at all
Kevin: hahaha
im telling u @tweet him
me: then i’d look like a stalker!
“it could be fun to talk to Colson!” – program director
Kevin: lol
it could be fun
i mean he’s young and he seems clever.
hell prolly say ‘STELLLLLLLLLLLLLLLLLA!!!!!!!!’ when he hears ur name
me: i totally don’t want to call colson whitehead
aaaaaaaaaaahhhhhhhhhhh
ok dialing.
Kevin: sweeeet
gimme the play by play
itll be fun
me: i haven’t hit send yet
Kevin: ill tell u what to say
as i peruse his twitter feed
me: loooooool
kk
i am gonna hit the little green phone button……….
now
waiting
ringing
he answered
we talked
Kevin: yeeeess
wat???
no way
me: he said he saw the email
he was teaching yesterday
Kevin: r u talking now
me: he is going to send the letter
no i can’t type and talk at the same time
!
i was paralyzed
Kevin: lol
me: i am as mad awk on the phone as you are
biiiiiiig awkward silences
followed by a rushed goodbye
and sigh of relief
Kevin: lol
i am so skillful at eating orangess
me: good. good for you.
I AM STILL SHAKING.
Kevin: lol
damn stella’s scared to talk to colston whiteheady
u have a crush on him?
me: no no no. tell me more about eating oranges.
i do. after reading his twitter.
Kevin: via dreads
i eat oranges without spraying juice all over the place
im efficient and smooth
me: ❤
Kevin: and thas wassup
me: since you’re not getting any action are you taking pride in eating out fruit
?
Kevin: lol basically.
http://www.charlierose.com/guest/view/2598
u can envision what he looks like
when you’re talking to him on the phone
me: hawt
Kevin: ‘hey, uh uh uh uh is your refrigerator uh uh uh running, mister whitehead?’
‘uh uh uh bc uh the letter the mail uh uh’
me: [pause]
Kevin: ‘twitter uh uh uh wyoming uh uh uh cowabunga uh GOODBYE!’
me: [pause]
cw: bye?
[click]
Kevin: damn
if not colson
then who do u have to call
‘uhhhh hi uhhhh thomas pynchon uhhhhhhhhhhhhhhhhhhhhhhhhhhhhhhhhhhhhhhhhhhhhhhhhhhhhhhhhhhhhhhhhhhhhhhhhhhhhhhhhhhhhhhhhhhhhhhhhh’

At the end of two years I’ll have hundreds of pages.  Will it be enough, though, to stretch out end to end and walk a path all the way back home?  California, Max. California.

last spring, a few of us mfa’ers enrolled in book arts, an art/english course team taught by Alyson Hagy and Mark Ritchie. let us say that we underestimated the amount of time and effort that goes into physically creating a book from raw materials, beyond the arduous task of merely generating content.  we laughed, we cried, we made books.  and it was a really great chance to view composition as something more dynamic than simply typing.  our creations:

much of kelly's work revolved around her love of insects & former life as a scientist "in the field."

a peek into the interior world of kelly herbinson. 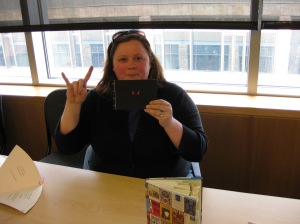 stephanie dugger (evil, like the fruit of the devil) found creative ways to present her poetry.

estella soto spent hours in photoshop manipulating an old barney's catalog & flirting with the guy at kinko's to give her a discount on the price of printing 18 double-sided glossy color pages for her final project: replacing simon doonan's catalog narrative w/her own short story.

katie schmid proved herself to be more than just a poet: she can sketch with the best of them. 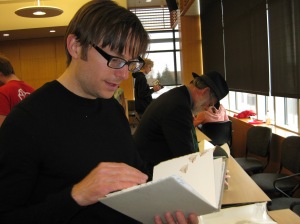 the faculty came out to the reception to show their support. andy fitch engaged in the art of reading.

creative writing @ the university of wyoming
Blog at WordPress.com.