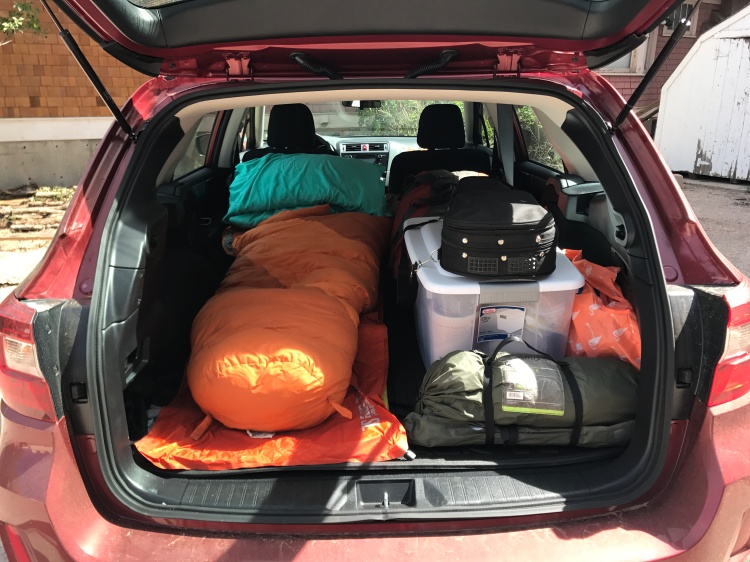 Since the last time I posted about first years (are we second years now?) and our summer plans, I’ve heard back from a few more folks excited to share their goals. Of course, in the same time frame, I’ve also hit the road to Alaska and find myself with rather limited internet access, hence the delay on this week’s post. (That’s my set-up above.) This week’s post is brought to you by the good people of Whitehorse, YT, and their multiple free WiFi hotspots.

Alex, one of our lovely non-fiction folks, is taking the summer to read and re-engage with the subjects (history, philosophy, cultural studies and literary theory) he’s been writing about all year for his thesis. (He’s also staying in slightly warmer climates after his first Laramie winter – he would like the world to know that -20F feels really, really cold.) Alex is about halfway done with the first draft, and hopes to use his downtime to revise and plan out the rest of the project. And because he’s so on top of things, he’s also working on applications for fellowships, grants, residencies, etc. The things you can accomplish when you’re organized…

Emily’s summer plans are a bit broader, as she keeps discovering new passion projects that take her down very different paths. She came into the program with a science background, and received funding from the Haub School of Environment and Natural Resources and the International Programs Office to study and write short stories about the ways in which ecotourism is impacting bioluminescence and the communities that serve as the gatekeepers to bioluminescent populations (fireflies, dinoflagellates, etc.). That research will take her to Indonesia, Puerto Rico, and the UCross Ranch in Northern Wyoming. During her downtime in Laramie, however, she’s working on several separate projects inspired in part by a literary portraiture class from spring semester. The latter will likely be the center of her thesis, but I can’t wait till next semesters’ workshops to see how the two projects influence each other!

Kevin, whom I’m lucky enough to work with on the Spoken Words podcast, is also going to be on the road for most of the summer, chasing cyanobacteria blooms. I’ll let him tell it: “Cyanobacteria love to soak up the summer sun while floating on bodies of water all across the country. These toxic and stinky unicellular organisms proliferate with the growing and mowing season by eating away nutrients from fertilizers and livestock manures.” He’s planning on talking to people in communities affected by cyanobacteria, people fighting the problem and those trying to profit off of it. His itinerary will be set by wherever the blooms appear this summer, but will likely include some or all of: the Snake River, Lake Eerie, the Finger Lakes, Chesapeake Bay, the Salton Sea, and Puget Sound. Come August, he and I will likely have added a collective 15,000 miles or more to our poor cars.

Over the next few weeks, I’ll start sharing more dispatches from the road as we see how all these ambitious summer plans start to pan out!